This is a story of a 23year old female patient suffering from Pilonidal sinus. The patient was suffering from ailment sinus 2year. It started with formation of boil along with pus discharge and pain over sacral region. Being a student she had a very stressful schedule, so she started ignoring it.

As the symptoms aggravated, the patient approached a surgeon in Nanded where she was advised a fistulogram; thereby underwent a vy surgery for Pilonidal sinus. After the surgery, the patient was completely relieved from the symptoms, but after 1 year the same complaints started occurring. The patient developed a boil over the sacral region with occasional pus discharge. Pain and other symptoms were neglected by medication. However, the ailment was creating a hindrance in daily routine of the patient. This frustrated the patient a lot and forced her to go for a second opinion.

She came to know about HHC through just dial and came for consultation. She was examined by Dr.Ashwin Porwal, Colorectal Surgeon & Founder of HHC, where she was diagnosed of having pilonidal sinus on clinical examination. As it was a re-current pilonidal sinus, she was advised laser-excision of the sinus. The surgery was performed in afternoon with the help of latest device Leo-Nardo laser introduced recently by Dr. Ashwin Porwal for the first time in India. The resultant wound was left open to undergo natural healing. The patient was discharged in the evening. Post discharge, she was advised follow-up once a day in a week for 2 months so as to clean the wound and to ensure natural healing process. A course of antibiotics, analgesics and antacids is prescribed for 14 days. Commenting on the aftercare follow-up of the patient she is absolutely stable performing her normal routine. 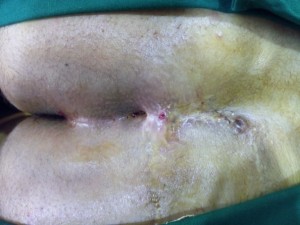 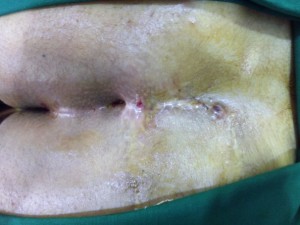