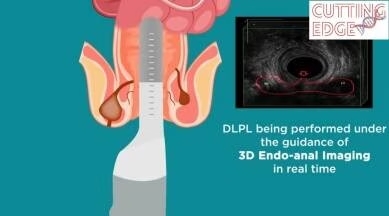 For 12 long years, US-based Julie Rogers suffered from a Grade 5 super complex fistula. Her personal health challenges made her seek a series of treatments that unfortunately did not offer long-term relief. She had no idea what to expect though when she arrived in Pune in July where Dr Ashwin Porwal and his team’s “healing hands” performed the Distal Laser Proximal Ligation (DSPL) procedure and freed her from pain.

There are various kinds of fistula and Dr Porwal’s patients vouch for a cent per cent cure. Take for instance Pune’s Dr Saloni Joshi who developed an obstetric fistula – a hole between the birth canal and bladder and/or rectum caused by prolonged obstructed labour – but was cured completely.

WHAT IS A COMPLEX FISTULA?

The condition has been known since ages and different management techniques for it have been suggested in medical literature. But it continues to be one of the most challenging clinical problems in anorectal surgery.

Various surgical interventions have had variable success. The surgical management of complex fistula is usually aimed at the permanent elimination of the suppurative process by drainage of sepsis and removal of fistula tracts while maintaining sphincter integrity.

Recently, the Indian Journal of Colo-Rectal surgery has concluded that minimally invasive, sphincter-saving DLPL surgery is safe and effective treatment for complex fistula‐in‐ano. “This is a minimally invasive sphincter saving surgery for complex fistulas. Basically it addresses the intersphincteric space which is the root cause of complex fistula,” says Dr Porwal, who has performed 4,661 such surgeries till date. In Julie’s case, an inflammatory bowel disease (Crohn’s disease) led to the fistula developing between one loop of intestine and another.

WHAT IS THE DLPL SURGERY?

Dr Porwal explains that the DLPL is based on two principles. One is debridement, which is a procedure for treating the wound on the skin. Inefficient debridement is one of the causes of recurrence in fistula. This is achieved in a minimally invasive way by using a laser, which takes care of the fibrosis associated with complex fistulas. The debridement is thorough and deep with the use of a laser, which can be easily negotiated within the Intersphincteric space and supralevator space.

“The other principle is the efficient drainage from the fistula in the first two to three weeks which is the key to success in curing it after surgery,” he says.

DLPL is performed under the guidance of a 3D EndoAnal Imagine machine which can identify hidden fistula tracts and micro abscess in real time during surgery. That is the key in getting assured results with surgery. It also minimises the risk of damage to sphincter muscles.

Widening of the external opening serves that purpose while superficial incision over the internal opening helps in proper drainage in the initial three weeks after surgery. This is achieved by timely follow-up planned at five days, two weeks, four weeks and six weeks. “That is the reason why DLPL is associated with a negligible recurrence rate,” Dr Porwal says.

There is no need for daily dressing with DLPL and the patient can resume work in about five days. There is also no risk of incontinence as sphincter muscles are not incised, says Dr Porwal, who has trained over 250 surgeons in the country and worldwide.