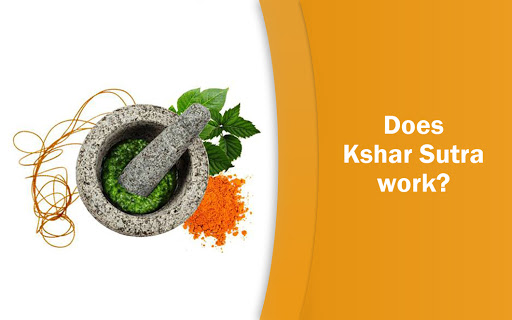 A number of treatment options are available and thus there is always an ongoing debate about which one outmatches the other. Here we will have a look at

, an age-old Ayurveda technique that has its origin in India. Kshar Sutra has mentions in the archaic Indian literature. It was supposed to be Sushruta’s ( ancient Indian surgeon known to have laid the foundations of surgery ) method of treating Bhagandara ( Sanskrit word for fistula ). The technique has been used since then, albeit modified with developing times. It makes the use of Seton – cotton thread impregnated with layers of medicinal plant extracts ( latex ). It takes about 4 weeks to prepare the Kshar Sutra. Other than fistula, it is also used for the treatment of other anorectal conditions like hemorrhoids, sentinel piles, polyps, warts and pilonidal sinus.

How does this ancient technique work in fistula-in-ano?

On the downside, Kshar Sutra is a multi-staged procedure and patients need to come to the hospital every week. The wound discharge is typically more as compared to other techniques. The healing time is also comparatively longer. Pain is a relative component, and whether Kshar Sutra is less or more painful than other procedures remains a matter of subjective variation. Although this technique provides satisfactory results in simple fistula, its efficacy in complicated ones remains debatable.

Kshar Sutra has withstood the test of time and thus, its credibility cannot be denied. The best approach would be to get it done from a skilled Proctologist who can combine it with other modalities for an effective treatment.