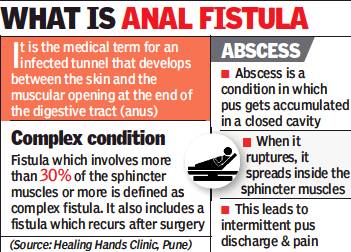 An error in clinical judgement literally turned a young doctor’s life into a nightmare for three long years, during which he consulted six specialists who treated him for everything, but

— the condition he was suffering from.

It was only after Aamir

(33), a Bangladeshi practising as a doctor in Australia, consulted a doctor in Pune that he was diagnosed correctly. He was operated upon here on January 17.

Aamir used to have intermittent pain in his bottom after passing off the stool. “The pain would go away within two to three days to resurface again,” he said, adding that the first episode of tremendous pain and large abscess formation occurred in July 2015.

In 2016, he was almost bedridden due to the condition. He lost 22kg weight in four months as he could eat only two bread slices to avoid defecation.

Aamir attributed the cause of his condition to lactose intolerance. “My liking for milk aggravated my problem to the extent that I ended up injuring my bowel,” he said.

In February 2016, Aamir had his colonoscopy done at another hospital in Australia where doctors found a lesion in the lower bowel on the left side. “But they completely misdiagnosed it as a mucosal prolapse,” he said.

As the pain persisted, the doctors did a CT scan on Aamir’s earnest request and admitted him to a hospital on September 2, 2016. “This was the time that I had my first abscess drain surgery. But sadly, the doctors did not find any opening in my rectal wall. Eventually, I had seven abscess drain surgeries done and every time the treating doctors failed to find an internal opening or fistula,” Aamir alleged. Frustrated and sullen, Aamir came across the work of Pune-based proctosurgeon Ashwin Porwal while browsing on internet for a probable cure to his condition. He eventually flew down to Pune in January 2018.